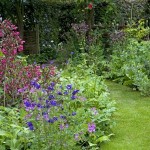 August is a difficult time in the garden, after the summer rush of roses and geraniums and before we enjoy the asters and autumn colour we need to look for plants which bridge the gap. 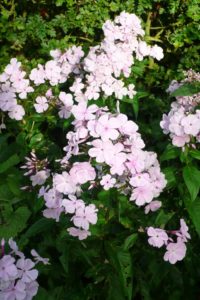 Phlox fill the gap wonderfully. They come in so many colours from white through to scarlet and mauve, several have interesting foliage and they all are fragrant. I have several favourites. Phlox ‘Blue Paradise’ has violet-blue flowers and smells so delicious I have it planted just outside my kitchen door. Phlox ‘Mont Fuji’ has large heads of pure white flowers, I grow it next to the white rose ‘Iceberg’, making a fragrant group. Phlox ‘Starfire’ has dark foliage, scarlet flowers. Phlox ‘Monica Lynden-Bell’ (pictured) has the palest of pink flowers and is one with an especially strong scent. Several varieties have variegated foliage which looks good from early summer and prolongs the interest in the garden. Phlox ‘Norah Leigh’ has good white edging to the leaves and mauve flowers, Phlox ‘Harlequin’ has white and pink variegation and pretty purple flowers. Phlox do not need staking but do need fertile soil and not to be water-logged in the winter.

Herbaceous salvias are another group of plants that do well in August. Salvia ‘Caradonna’ has purple black vertical stems studded with tiny purple blue flowers the upright stems look good next to yellow Achillea. There are varieties with white flowers or pink, all grow on upright stems and are ideal for adding shape amongst the billowing plants of mis-summer 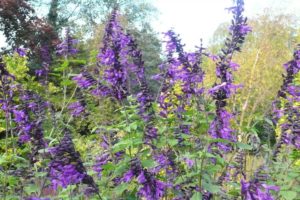 Another hardy salvia I grow is Salvia glutinosa this could be called a thug but I find it very useful as it has large weed supressing foliage, pretty yellow flowers splashed with maroon but its best attribute is that it will grow in shade and seems remarkably happy even in dry shade. We also grow a few Salvia which need winter protection in a cold greenhouse, Pictured left is my favourite is Salvia ‘Amistad’, tall at 120cm with large navy-blue flowers, ideal to fill a space where earlier plants have finished flowering.

I use Dahlias in the same way and especially like the single flowered forms, I think they fit into borders better than the very large flowered forms and being single they are good for bees when double flowers are of no use.

We grow Dahlia ‘Twinnings after Eight’ which has very dark, almost black foliage and white with a tinge of pink, flowers, Dahlia coccinea is a single species form, very easy from seed. It is tall and has the most wonderful scarlet single flowers, very eye-catching amongst all the yellow daisies that start appearing in August. Dahlia merkii is another species easy from seed with small soft pinkie-mauve flowers, much admired in the garden. All these Dahlias are easy to keep over winter, just dig up the tubers after the first frost and keep them in a frost-free shed, next spring they can be potted up and will make large plant for the following summer.